Gnostic Mandaean Scrolls: I became the illuminator of the worlds of Light

Gnostic Mandaean Scrolls: I became the illuminator of the worlds of Light

Gnostic Mandaean Scrolls: I became the illuminator of the worlds of Light
By James Bean
Copyright January 2006 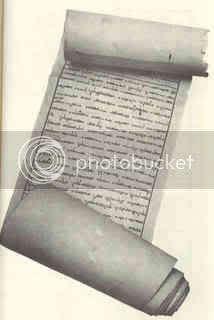 I sometimes like saying that the Nag Hammadi Library found in Egypt represents 'the prose of the Gnostics', but the Mandaean writings from Iraq are 'the poetry'. Below is a Mandaean psalm-scroll translated by the German scholar Werner Forrester. Below that are a couple of Mandaean Aramaic words defined. And below that, I provide commentary on the meaning of these ancient Aramaic verses from the Middle east, chanted in antiquity. I have always been quite fond of these Mandaean psalm-scrolls translated in "Gnosis II", "The Canonical Prayerbook of the Mandaeans" (out of print), and also in, "The Gnostic Book of John the Baptizer" (Kissinger Reprints).

In the Name of the Great Life,
Sublime Light Be Praised.

I became the illuminator of the worlds of Light

**"Suf" in Mandaic Aramaic: "Sea of Reeds or Sea of the End, a place of unbelievers: like the Egyptians in the biblical narrative: the departure of the Israelites from Egypt was evidently interpreted allegorically as the departure of the soul from the body." (Glossary in "Gnosis II")

*"Manda dHaiye": -- Gnosis of the Great Life (Great Life, a term for God); Knowledge or Acquaintance with God; Divine Knowledge, often personified in the Mandaean texts as "the name of the most important messenger of Light and Redeemer". (Glossary in "Gnosis II")

"I became the illuminator of the worlds of Light."

"Understand what the Great Light is". (Apocryphon of James the Just, Nag Hammadi Library) In the Mandaean texts, written in a dialect of Aramaic almost two thousand years ago, a term for God is "Light", very much as in the Gospel of Thomas: Light=God=Christ=Kingdom of the Father. "God is Light and in Him there is no darkness." "Darkness is not dark to Thee." One phrase or benediction often repeated or chanted literally thousands of times in these old Mandaean scrolls is: "In the Name of the Great Life, Sublime Light Be Praised." God is described as "the Great Light", and heavenly realms are called "A Place of Light." Souls clothed in their heavenly garments are described as radiant beings like suns or stars.

The true messenger of God is a "Light-giver".

"Whoever is enlightened and instructed by me rises and beholds the Place of Light."

As wonderful as old writings of saints might be, people are in need a competent living teacher who has become one with God to be their guide, in order to have the right-view, right-knowledge, and right-practice. Otherwise, it is a teacher of a lesser order that is one's influence, or perhaps one's own limited and ever-changing interpretations. We "see through a glass darkly" (saint Paul), which means that what the ego may comprehend is not necessarily the whole picture but a dim outline at best. Only someone who is one with God is qualified to guide others into that divine experience. Rather than the usual "blind leading the blind", someone with Sight needs to be recognized as the guide. Like the Mandaeans of old, we also need a living Light-giver.

What is the result of this spiritual guidance from "a living one"? Souls "ascend to the Place of Light and behold the Place of Light", and, "....Their eyes were filled with Light..." There are visions of the divine Light -- real Light is seen, and ascensions to "the Place of the Light" are experienced.

Clues are provided in the text about not only the luminous visionary results, by at least one of the spiritual practices that was imparted, and it is a contemplative practice universally taught by saints and mystics.

The Prayer of God's Name has been taught, and continues to be taught, by countless saints and mystics. The name or names that one is instructed to repeat may vary from place to place, from language to language, and from tradition to tradition. A sacred word is slowly and prayerfully repeated, either verbally, or even better: mentally (higher, more "within"), and can indeed lead to beatific revelations or visions of Light, and even travels in spirit, "up hither" to the Place of the Light.

"'The vine which bears (fruit) ascends,
(the vine) which bears nothing is cut off here (from the Light).'"

Here there is language that is reminiscent of the Gospel of John about abiding in the living vine of Yeshua and hearing the heavenly Voice: life is connected with the Great Life. On a spiritual level, one abides in the teacher, one becomes united to the teacher, puts the radiant form of the teacher on like a garment, and this is an essential stage of the journey of ascension.

Being able go go beyond darkness is extremely important. As has been said, "Watch out that the vision within you is not darkness." "Consider the One who is alive while you are alive, lest you die and then seek to behold that One - and you will not be able to behold." (Bently Layton's translation of Gospel of Thomas, 59) And, "Seek to see Him who is living, while you are living; rather than to die and to seek to see Him