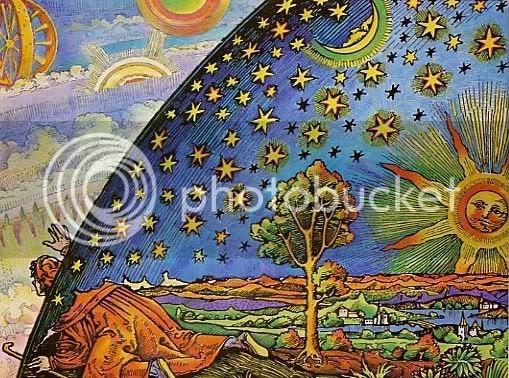 The classic Gnostic soul struggled against the cruel hand of fate, astral archons (rulers), principalities, powers, emperors, and bishops. The Gnostic teachings from the Coptic/Greek period have quite an ascetic tone. "The material universe is evil", "be not of this world." Holy texts were studied by Pachomian monks living in caves not far from Nag Hammadi, Egypt. The discovery site of the Gnostic Gospels was near those caves. On the walls of some of those caves are examples of graffiti: crosses and fish symbols. After the Fourth Century, Gnosis mostly disappears from the scene in the Roman Empire due to extreme persecution from those who paid lip-service to phrases like "love your enemies", and' "turn the other cheek", but they had no concept of democracy and freedom of religion -- freedom for all religions. The Library of Alexandria was burned, the Nag Hammadi Library, buried.

In the East however, Gnosis continued to develop and evolve, taking on more of an ecstatic, poetic ethos during the medieval period. The type of Eastern Gnosis I follow isn't so ascetic as Nag Hammadi mysticism. After all, the lower material universe is no longer a "prison" for those who can freely come and go as they please. This changes everything. I know of some mystics that are very otherworldly and yet can also enjoy looking at the stars, feasting on great Indian food, love the ocean or a beautiful sunset. Very out-of-this-world during meditations, and at the same time, we come to see the Light of God everywhere, within everyone, in this outer plane of existence as well, all as a result of those advanced meditation experiences. "His Presence fills the Three Worlds". (Adi Granth)

Such extremists we humans are, either hedonists or cave-dwellers. We were meant to go from state to state, from the world of action to the world of contemplation, from the waking state to the dream state to the unconscious state of deep sleep, and there is also the Fourth State beyond. This too can be divided into several levels or states: astral, causal or akashic, mental, etheric, and spiritual, the True State (Timeless, Sat, Haq, "Spirit and Truth". Full circle we come. The spiritual state can also be perceived as four different stages, ranging from the "drop" (the soul) remaining separate, to "nearness", and all the way to that of Oneness or merging into the Divine Ocean (Kaivalaya, Anadi, Anami, Ra-Dha-Swam-I, the "Nameless One in the Eighth").

Know also that the Reality
has described Himself as being
the Outer and the Inner,
Manifest and Unmanifest.
He brought the Cosmos into being as constituting
an Unseen Realm and
a Sensory Realm,
so that we might perceive the Inner though our unseen
and the Outer through our sensory aspect.
(Ibn `Arabi, "Ibn Al `Arabi - The Bezels of Wisdom", Paulist Press)

Not an easy balancing act, this concept of having one's feet upon the earth and yet one's third eye-soul ascending through various realms going toward the Great Light during practice each day, yet everyone will make it back there eventually. It's simply a matter of "time" and how receptive we are to this experience during the present life. Some are in a hurry to return while others travel much much much more slowly.

It was for the sake of the God-conscious beings
that our True Lord created this earth, and began
this play of birth and death.
(Guru Nanak)

To Him We Shall Return

I died as mineral and became a plant;
I died as plant and rose to animal,
I died as animal and I was a man.
Then why fear disappearance through death?
When was I less by dying?
Next time I shall die
To soar -- with angels blessed,
But even from angelhood
I must pass on;
All except God doth perish.
When I have sacrificed my angel soul,
I shall become what no mind ever conceived.
What you cannot imagine,
I shall be that.
Oh! let me not exist, for non-existence
Proclaims in organ-tones,
'To Him we shall return.'

"We have come from the Light and will return there again." We're already in heaven if we did but know it. A great Master by the name of Huzur Baba Sawan Singh was once asked, "How long does it take you to go to Sach Khand (the spiritual realm, Sat Lok)"? He closed his eyes for fifteen seconds, and then opened them again, saying, "just that long". This is the real Secret.

Thy Light is within the beings,
And the beings are all within Thy Light.
O supremely Incomprehensible Lord,
Thou Art perfectly filling all things.

It is the Light that lives in every heart,
And Thy Light that illuminates every soul.
It is only through the guru's teachings that
Light comes to be shown.
(Guru Nanak, Peace Lagoon translation of the Adi Granth)