A Sant Mat Way of Life

A Sant Mat Way of Life

Sant Mat Fellowship:
http://groups.yahoo.com/group/SantMatFellowship
{"Repeat the Name of your Beloved, day and night, again
and again. With care in thought, word and deed, you will
cross to the other shore." -- Dadu}

From, The Philosophy of Liberation, by Maharishi Mehi 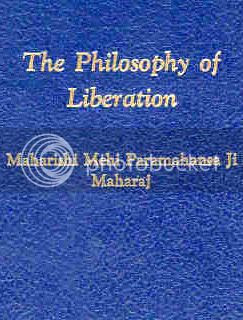 87. The practice of Nadanusandhana (the Yoga of Sound) is not mere child's play. Its full practice cannot be exercised by one who lacks Yama and Niyama (virtues and moral rectitude). See the following section 88 for more detail on Yama and Niyama.

There are sounds due to gross vibrations in the material body. To meditate on these gross sounds and believe it to be as the full practice of the Yoga of Sound shows a lack of knowledge of Yoga. According to the literature of the Sants (Saints), Yama and Niyama are essential for mastery in the practice of the Nadanusandhana (Yoga of Sound [Nada-nu-sand-hana, the spiritual practice of inner Sound meditation, also called Surat Shabd Yoga]).

89. In following Yama and Niyama, one exercises aversion from the five sins, serves the spiritual master, attends satsang, and practices meditation as referred to in section 60.

90. A comfortable asana (a pose of sitting or posture) of keeping the head, neck and trunk straight and steady is a must for meditation. Without the ability to sit in such a steady posture for prolonged periods, meditation cannot be practiced.

91. Meditation should be practiced being alert, without being drowsy, shutting the eyes comfortably and without turning the eyeballs or pressing them in any way.

92. The practice of meditation should be an essential part of the practitioner's daily routine. The preferred time of meditation is Brahmamuhurta ([Hour of God: Brahma-mu-hurta, or Amrit Veela: Hour of Elixir]: very early in the morning: 3:00 A.M.). Likewise one should meditate at mid-morning and then again in the evening time. While falling asleep, one should also engage his mind in meditation. Further, it is good to practice Manas japa [Simran] or Manas dhyana [Dhyan] while working.

93. Before learning the Nadanusandhana (meditation on inner Sound) in practicing Manas japa (mantra repetition), Manas dhyana (focusing on the form of the master or deity) and Drshti Yoga ([inner Light meditation in the Third Eye Center or Eye-Focus] focusing on a Point that is practicing one-pointedness), one should meditate with eyes and mouth shut. Upon learning Nadanusandhana (Yoga of Sound [Inner Sound meditation]) from the Master, one should also close the ears.

94.............In the initial stages of dhyana (absolute concentration), pratyahara is practiced. [Note: Pratyahara means to bring back. Bringing back or refocusing one's attention during meditation, bringing the mind distracted by worldly thoughts back to the Focal Point during meditation.] Through the means of pratyahara, the mind is brought back repeatedly to the Focal Point. By this constant practice of pratyahara, one is eventually able to concentrate for a short period on the Focal Point. This state of concentration is called dharana (steadiness of concentration or absorption). When absorption is maintained for longer and longer periods of time, then it is dhyana (absolute concentration). Then in this state of dhyana, one is able to grasp the Streams of spiritual Sounds (described in section 60) and finally achieves samadhi (Unity [Union, Absorption, Oneness in deep meditation]). Drshti Yoga (seeing the inner Light---the Yoga of Vision) will greatly facilitate pratyahara and dharana...... (Maharishi Mehi)

Masters say: "An intense longing to meet the Lord during one's lifetime is the first and foremost qualification for Initiation. 'Seek, and ye shall find', is the principle."

At the time of Initiation one vows to practice meditation each day. The spiritual path is a life-long commitment.

1. Abstinence from alcohol and drugs;

2. Non-Violence (Ahimsa in thought, word, and deed) including vegetarianism (abstinence from meat, fish, and eggs);

5. Loyalty to ones spouse;

. Another Version of This is called: The Five Precepts

1) Refrain from taking the life of sentient beings. [This precept requires strict adherence to a lacto-vegetarian diet: no meat, fish, poultry or eggs (fertilized or non-fertilized).]

2) Refrain from speaking what is not true.

3) Refrain from taking what is not yours.

5) Refrain from using intoxicants.
Posted by James Bean at 7:39 PM

Sant Mat Fellowship:
http://groups.yahoo.com/group/SantMatFellowship
{"Repeat the Name of your Beloved, day and night, again
and again. With care in thought, word and deed, you will
cross to the other shore." -- Dadu} 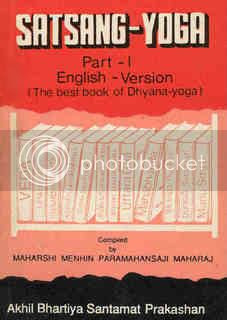 [There are 101 (important) nerves (nerve currents) out of which the Sushumnaa/Sushumna is the most important. Sushumnaa lies beyond, is devoid of ‘raja/rajas’ -one of the three qualities- thus being predominantly ‘sat’ (the best of three qualities which makes a person inclined towards spirituality, a virtuous, pious way of life), and is the form of Brahma.]

[There is ‘anaahat sound’ (primeval quintessential unstruck sound) inside - the sound that emanates from it is illuminated, i.e. consists of light within it. The mind (through meditation) is made to immerse or be absorbed in that light.]

[Aadhaar (base) is called by some as Sushumnaa and (also) Saraswati.]

[There is no doubt that by perceiving the light in the Aadhaar Chakra (Sushumna) which is full of light as bright as the beam of lightning, liberation is effected provided Guru is pleased.]

[(Those who) enter into the Sushumnaa having blocked left (idaa) and right (pingalaa), attain liberation entering into the Brahmarandhra (gateway of Brahma).]

[On entering into Sushumnaa moon and sun (in literature idaa and pingalaa have also been referred to moon (representing ‘tamas’) and the sun (representing ‘rajas’) respectively – English Translator) are lost.]

[If the Yogi stays in Sushumnaa even for a kshana (unit of measurement of time which is equivalent to a very small fraction of second – English Translator)…if the yogi stays in the Sushumnaa for even half a kshana … when the yogi is absorbed in Sushumnaa as salt in water … and when the yogi gets immersed in Sushumnaa like a mixture of milk and water, then his knot gets broken, all his doubts get demolished and he attains to Supreme State merging into the Highest sky.]

[The benefits that accrue out of paying obeisance to Manikarnikaa after having a bath in Gangasagar are not equal to even one-sixteenth of the benefits resulting from meditation in the central nerve-current (Sushumnaa).]

[(Merits of) Thousands of Ashwamedha Yajna and hundreds of Vaajapeya Yajna together can not sum up to even one-sixteenth of meditation in Sushumnaa.]

[He who always attends meetings in Sushumnaa gets absolved of all sins and is blessed with true benediction or welfare.]

[Numerous yajna, daana (donations or alms), vrata (meritorious acts of devotion such as penance, vow etc.) and niyam (observing set of rules) can not add up to one-sixteenth of Sushumna – Dhyana.]

[Regular practice of Meditation on Divine Sound leads to destruction of passions or intense desires. O Brahmaa! Then the vital life current merges into God.]

[People cross the ocean of existence with diligence holding the Guru to be the adept boatman (who steers the boat) and his counsels as the strong boat.]

While defining Santmat Maharshi Mehi Paramhans ji Maharaj, one of the greatest ever exponents of Santmat, says (in his exquisite book “Mehi Padavali”):

The urge or impetus to acquire ‘shaanti’ (tranquility or stillness of mind) is so natural to human heart. Inspired by the same urge, the ‘rishis’ or sages (who are said to have visualised the mantras - which were later compiled in the form of Vedas & Upanishads - during their meditation) in ancient times, made all-out attempts in search of ‘shaanti’ and described the ideas or ways to obtain it (‘shaanti’) in Upanishads for the beneficence of common people. Sants such as Kabir Sahab, Guru Nanak Sahab, etc. also expounded thoughts or ideas resembling or identical to these (ideas expressed in the Upanishads) in their local languages such as Bhaaratee (Hindi), Punjabi, etc. These very ideas or thoughts are termed as ‘Santmat’. However, the sacred verses of the Upanishads particularly have to be acknowledged to be the basic foundation or the bedrock of Santmat, for the highest knowledge or wisdom and the precise principal means to attain that wisdom namely, the ’naadanusandhaan’ or ’surat shabd yoga’ (the subtler and the subtlest meditation of Santmat, in which the practitioner meditates upon the Divine Sound/Vibration that springs directly from the God), in which Santmat takes so much of pride have been dazzling brilliantly upon this very terra firma since times immemorial.

[Through practice of Pranava-Brahma Yoga (Naadaanusandhaan Yoga or Meditation on the Divine Sound Current) that naada/nada (sound) becomes manifest which is illuminated and benevolent. As the Sun glitters in its full glory after scattering away of clouds, the soul also is self-illuminated]

[Practicing meditation on Divine Sound turns one deaf to the external sounds or the sounds of the outer world (what is implied here is that during this meditation when the attention is fully focused on listening to the inner sound currents, the current of consciousness is withdrawn from the hearing organ i.e. ears, or for that matter all other sense organs, and thus sounds of the outer world can not be heard). Conquering all the impediments one enters into the Turiya/Tureeya (the state of pure consciousness) within a fortnight.]

[In the beginning of the meditation (on sound) grosser sounds are heard. With maturity of practice the sounds heard tend to be increasingly finer and finer.]

[In the beginning (stages of meditation) sounds perceived resemble those of a (roaring) sea, (thundering) clouds, war drum/ trumpet and (gurgling) waterfalls while in the middle stage (they appear to) resemble sounds of mardal (a sort of drum), gong and singha (a type of trumpet).]

[In the final stages (the practitioner hear) the sounds of kinkinee/ majeeraa (cymbal), flute, lute and buzzing of bees. Thus he gets to listen to finer and finer tunes.]

[When (the practitioner) reaches unto that place where the sound of large trumpet is heard, he should try to perceive the more and more subtle (or minute) sounds.]

[(The practitioner) may shift his attention from subtler to heavier (coarser or grosser) sounds or vice versa (from coarser to finer sounds), but he should not divert his attention in any other direction.]

[Stilling one’s attention on any one of the sounds he becomes established there and is absorbed in that (sound) only.]

[Becoming completely forgetful or unaware of the outer emotions he gets dissolved in that (sound, or listening to that sound) like (a solution of) milk and water and, thus, is immersed in the chidaakaash (conscious sky).]

[Making himself disenchanted, detached or disinterested or withdrawn from the sensory objects the Yogi should still his attention upon the (inner) sound through regular practice keeping the defilements of the mind well under control.]

[Abandoning all external worries and (worldly) efforts, a Yogi should dissolve his chitta into the inner divine sound, meditating upon it.]