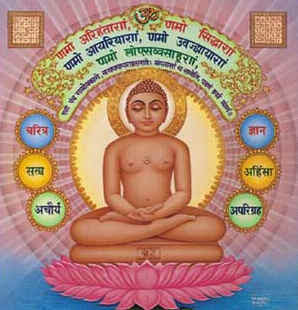 Jainisim and Surat Shabda Yoga (Yoga of Divine Sound)
By Swami Santsevi Ji Maharaj
The Harmony of All Religions,
Excerpted from the chapter on Jainism


In the Yoga of Sound (Surat Shabda Yoga), the gross material sound manifests initially, and thereafter the Essential Inner Divine Sound (Anahad), also know as OM or Pranava. It is the Cosmic Sound of the beginning.

There are several references to the essential Cosmic Sound in the context of Lord Mahavira’s teachings:

"Taking hold of this essential Anahat element (the Sound of OM) or Shivanam, the ascetics have gone across [beyond] this world of delusion and pain."

In this way meditation upon the mantra and the Essential Sound are described. Also the technique of meditation on the OM Sound is elaborated:

"O Ascetic! Meditate on the Cosmic Sound of OM because it is like rain for extinguishing the fire of suffering. And it is also like a lamp which illuminates the subtle essence of the sacred teachings. It is the governance of good deeds." (Jnanarnva, sarga: 38)

"From the infinitesimal point and the Divine Sound the subtlest waves (vibrations) reverberate."

In his book, The Method of Using Preksha Dhyāna, Acharya Mahapragya writes:

"Close both ears with your hands and listen to the Inner Sounds."

"The mendicant with purified mind should meditate on the sky with rainbow, lightning, and the sound of thunder, and full of clouds."

"In the Divine Sound of God (Bhagawan) all the mysteries are revealed."

"What does one hear with these ears? It is a sweet Sound. . . Closing my eyes, as if I were united with God, I was away from this world. Only my Peace incarnate and dispassionate Lord (Mahavira) and I existed [ego and worldly concerns had vanished in the state of complete tranquility]."