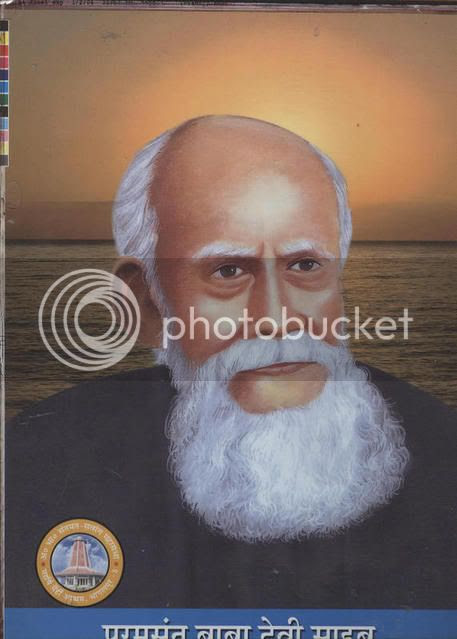 Unless the 'jiv' (non-liberated individual soul) reaches into the Fourth Plane having got out of Plane No. 8 (as indicated in the Chart of Inner Planes in Part-II), 'moksha' (liberation) is not possible. Jiv can not get to the swarg (heaven) and Baikunth (the kingdom of Lord Vishnu – creator god in the Hindu mythology) unless it gets to Plane No. 9, because all the things that are, as described in scriptures, ascribed to the Heaven, Baikunth etc. are to be found here only.

Drishti–Saadhan (The Yoga of Light) refers to that meditational practice which is carried out with the help of eyes. Hundreds of ways and methods of practising this (drishti–saadhan) are in vogue in India and other countries, but many of these are such that these make the eyeballs crooked or distorted (squint eyes), while some others lead to the loss of eye sight, and there are yet others which damage the pupils of eyes (causing blurred vision) beyond redemption even if these are treated by hakim (term used for doctors, generally Muslim, practising treatments based on the old Yunani or Greco-Persian System), vaidya (term generally used for Ayurvedic doctors) and doctors (term generally used for modern-age Allopathic doctors) lifelong. The right way to practise drishti–saadhan does not have to do anything with the (gross) eyes and eyeballs, neither does drishti mean "eyes" or "eyeballs", a confusion which leads to losses or difficulties as referred to above.

Drishti means 'sight' or 'vision' which is not made up of flesh and blood. This power to see or sight is a powerful thing which has revealed a lot of hidden disciplines of learning & scientific knowledge to the world; the secrets of the various types of 'siddhi' (supernatural or extrasensory powers) can also be known or obtained by no other means than this. Drishti is the first step or technique of Yog–Vidya (Science of Yoga); the technique of Drishti–Saadhan is so wonderful that it does not cause any discomfort, difficulty or pain to any part of our gross body. By means of this, the practitioner is able to quickly realise the clues or secrets which have been eulogised in heavenly or divine books on God, and then, all the rules & principles governing the world, which can not be attained by merely reading and listening to all the books lifelong, keep standing in humble subservience, attendance or slavery before such a person.

Drishti, however, can reach only up to places or worlds which have "roop" (shape or form – gross or subtle) and can be seen, and from where this cycle of birth & death keeps on taking place. It can not go or take one beyond the "roop-jagat" (planes with or having 'forms' of all sorts), can not go to planes which are beyond roop (shapes, forms & outlines), to realms where moksha can happen. In view of sants, the highest or the loftiest thing is moksha and drishti can not reach there. Therefore, the next technique – that of "shabda–saadhan" (Yoga of Sound) – to reach there (moksha) is taught.

In the "ilm-yog" (skill or teaching of yoga) the highest principle, which enables its practitioner to attain moksha, is that of shabda (sound or word) which is known by several other names. Some of the Mahatmas (great souls, sages, or saints) form and preach their traditions or sects by making this shabd–maarg (the technique of sound) the foundation, while some others teach this, propagate this (shabda-marg) by forming different societies etc. Thus this 'shabda' is the soul of religion as well as science – no religion or sect can do without this principle, no science or discipline of learning can do without its help.

Sages and sants adopt the straight & simple way of living and preach us to meditate with surat (concentrated or focussed, alert attention); this meditation can be practised in any posture –sitting or reclining, and by anyone whether a follower of Vedic Religion, Islam or Christianity whatever. What is important is not to live a single day in life without practising meditation, all the experiences of pains & pleasures of the world, one has to go through, notwithstanding.

They (these sages & sants) have the briefest or the shortest principle – one which is not found in any of the languages such as Sanskrit, Arabic, Persian, Jewish etc., and which has not seen the light of any printing press, but the one whose copy is found inside all human beings and which is written about in fourteen pages (meaning "found in the fourteen planes of creations" as described earlier in Part –II). Unless and until one practises (meditation) within or inside (oneself), one would not be able to learn even the ABC or the alphabets or to read this (principle).

The common message that all the sants have to give is that whatever – inside or outside – can be seen (comes into sight – gross or subtle), and as far as there is "roop" (form or shape), all is illusory and impermanent; beyond this (roop) is a realm which has never been born and will never die or be destroyed. That alone is truth. It is indestructible. It has no colour, no shape/form, and no particular name; but it is something which can be perceived or understood and, therefore, is entitled to be described or explained with the help of a (symbolic) name. Jiv is a part (inseparable part) of it, because jiv, too, is indestructible. Merging this (jiv) into that (God) is known as internal satsang and where (in the outside world) spiritual people gather together to discuss (this principle) is called external satsang. Those persons who live and practise in accordance with this tradition and principle are called sadhu (sages), and those who have reached or raised themselves into that realm, where the truth alone exists, are called sant (the English word 'saint', though close and the nearest match, is not an exact translation of the Hindi or Sanskrit word 'sant').

There are only two, not many, means for practice (of meditation) among sants – one is 'drishti' (sight or vision) and the other is 'shabd' (sound or word).

From the Preface (written by Baba Devi Sahab) to "Baal Kaa Aadi Aur Uttar Kaa Ant" (Beginning of Baal and the End of Uttar) of Sant Tulsi Sahab:

Page 58-59:- In Santmat the world (creation) is not considered to be without an end or never-ending. As the world was born (created) sometime in the past, it shall have to die (be destroyed) also at some point of time. When doomsday will come, all the realms up to as far as there is 'roop' or 'shakal' (form or shape) will get destroyed. That means such places up to where there exists some 'Lok' (world) or 'Kamal' (lotus) and 'ishwar' (Lord or God) or lord of these lotuses will meet their end or destruction some day.

Page 63: "Animaadik":- This is the divine symbol, mark or sign that is perceived or met with on the way of practicing meditation. It takes a lot of practice to know the inner secrets. It is not possible to practice in a proper way without learning the right technique or trick of the trade and this (learning) may happen in either of two ways, firstly it may very well be achieved with the grace of an accomplished Guru. Secondly, it may come automatically because of the earnings (fruits) of the previous births, and thus he (the practitioner) automatically may inherit the required skills or provisions. But both the categories of persons badly need satsang (noble company or gathering), because it is not possible to understand or perceive those secrets which these people ferret out following rigorous (meditational) practice without the assistance of satsang or Guru.

It is not known yet as to who was that first person who established Guru and the principle of Guru in the world. Had he not laid this rule, neither the Real 'maalik' (Lord or God) would have been found out nor would any proper arrangement (for the same) have been feasible.

All the professions, skills and degrees such as those of B.A., M.A., Shastri, Hafiz, Maulavi, Civil-Physician, Carpenter, Cobbler etc. and the ways to realize God require Guru (teacher). People belonging to such religions and sects which do not believe in Guru or Gurudom will always be fanning or inciting riots and be wandering aimlessly all their life, because neither they have anybody to impart them the wisdom, nor they are going to realize that they did not pay heed to that sacred and divine principle which was first established by man.

Page 68 - Satgur: Satgur is formed of two words, 'sat' and 'gur': 'sat' means truth and 'gur' means secret, way, or technique. But here satguru is used to imply the person who can teach the secrets to perceive the Guru in the form of Divine Light and Divine Sound. Such a Guru commands the highest status. Unless jiv would accept (such a Guru) as his Hakim (doctor - to cure him of the diseases of mind) and have unwavering faith in his words, he would not be able to accomplish his true objective.

Satsang (External/outer and Internal/Inner): That satsang is external in which Guru teaches the inner secrets (of meditation, jiv, world, Brahma etc.), and that satsang is internal/inner in which the jiv itself is able to perceive or realize the secrets of Brahma, Parbrahma, Anaam etc.

Page 69 – Adhikaari (Eligible, Qualified, entitled Fit or suitable): Such persons who are all the time busy in mundane worldly affairs and are not able to spare even one or two hours a day (for meditation), are not fit to be initiated into inner meditation, for even if these persons get to know about the way to the inner secrets, of what use it would be to him!

[When sadguru Baba Devi Sahib was nearing the time of his departure from this ephemeral world for his true destination, satsangis humbly requested him to bless with his parting words. To their request, Baba Devi Sahab had obliged by saying, "Duniyaa waham hai, abhyaas karo" (meaning, this world is an illusion, practice meditation)]