Journey to the Realm Beyond Suns and Moons, Nights or Days

Journey to the Realm Beyond Suns and Moons, Nights or Days 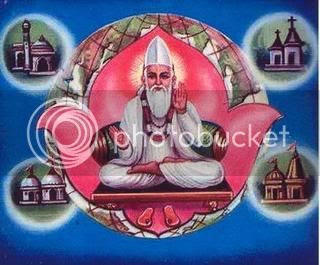 No air or water exists there; only those who have reached there know of (that realm). ||3||
Neither is the Earth there nor is the sky, that land is inhabited by Sants (who have accomplished Self-Realisation and have become one with Him). ||4||
Time has no access there, nor do the sunshine and shade exist there. ||5||
(That land) is not attainable through "hathayoga" by (hath) yogis, nor by "tapasis" (ascetics or performers of austere devotion) who burn (trouble or hurt) their bodies in the fire of "panchaagni" or "Panchadhuni" (ascetic practices or self-mortification). ||6||
Those who know the art (right way) of reverting their "surat" inwardly from the outer world, can get there (to that land) easily through dhyan-yoga (inner meditation). ||7||
O Dear Brother! Even "sohangam naad" does not play there, nor are heard the sounds of conch or great pipe (because that realm is "nihshabd" or Soundless). ||8||
There "nihakshara" is spontaneously chanted (without any conscious chanting), and the primeval Sound naturally emanates out of the void. ||9||
This temple (body), which God has filled with divine Light, has become full of darkness for lack of the eye (the inner vision or sight). ||10||
Strange is that country, says Kabir, and is perceived by only a dear devotee of God (who practices inner meditation having learnt the right technique from a true Guru). ||11||

Sant Kabir Sahab was not a linguist or scholar, but his experiential verses are very much in agreement with the Vedas, Upanishads, Shrimad Bhagvad Gita and the sayings/discourses of other sants. Certain such references are produced below for reflection by the learned:

[Then (that time) death did not occur nor was the "amrit" (elixir or the nectar) there, that is, there was neither life nor the absence of it; neither the awareness of night nor day. The true nature of that entity was the vital life force, but it was not the `sthool vayu' (gross air). He was equipped only with his own power to hold or sustain the world or creation. There did not exist then any other matter subtler than Him.]

[In that world neither does the Sun shine, nor do the moon and stars. Even the lightning does not show up there, what to talk of the fire! Everything glows through His Light, everything is seen through His Light.]

[Neither the sun, moon nor fire can illuminate that Self-illumined One. Mine is that realm, the Absolute Kingdom, going where one does not have to come back or return (to this world).]

[The Moon does not shine there nor do glitter the Sun, stars or lightning.]

[Where there are no Moon, Sun and glistening stars; where there are no trinity of gods (Brahma, Vishnu and Shiva) and play of the three gunas (three gunas namely `sat', `raj' and `tam'). Where there are no Vedas, no dichotomy, no Yoga, no `yajna' (religious sacrifice and oblation) and `tap' (asceticism). No air, land, fire, sky (space) and water subsist there. No cycles of days and nights there. No sins or virtuosity. There is no beginning, middle and end of that. There Brahma and Brahma alone exists.]

As per a story in "Bahiyasutta" in the book titled "Udaan" a monk named Bahiya is said to have attained nirvana. Throwing light on the concept of nirvana, Lord Buddha says,

[That is Nirvana where there is no room for water, earth, fire and air. Stars do not twinkle there, nor does shine the Sun. Though there is no moon-light there, there is not any darkness over there. When a muni (hermit) or a Brahmin becomes silent (still), he automatically knows Him (God) and becomes free of the dichotomy of form & formlessness, pleasure & pain.]

[Where there is no earth and sky, the moon and the sun do not emit light. There are no Brahmaa, Vishnu or the ten incarnations there. Air or water does not have a reach there. Vedas or other scriptures can't know Him. No light glitters there; sound does not buzz in that land. That place is beyond all form or formlessness or even the essential Sound.]

Listen what does Sant Keshavdas ji have to say on nirvana, "That is the position of Nirvana, the highest or the absolute realm, where there is no scintillating light, no Sun, no Moon, no states of day & night."

Sant Tulsi Sahab of Hathras proved the rank of nirvana to be beyond all sorts of fetters. Narrating his own experience he states,

[Holding on gratefully to the gracious hands of blessings of my Sataguru I came out tearing all the trappings and reached unto where there is no sunshine, no Moon or Sun.]