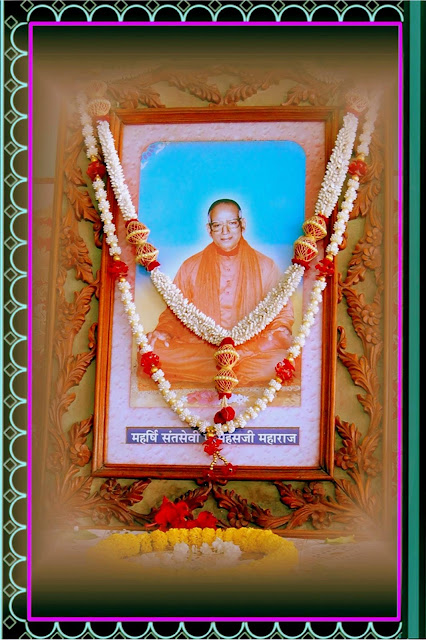 Santsevi Ji Maharaj carried on the tradition in the Bhagalpur Ashram after the passing the the Great Sage Maharishi Mehi in 1986.  He is most certainly an accomplished adept whose wisdom and compassion was known by all who knew him. Santsevi Ji met his teacher Maharishi Mehi in 1939. Santsevi Ji served his teacher with devotion and service rarely seen. Although, Santsevi Ji attended school only to the 7th grade his intellect is remarkable. On behalf of and at the direction of Maharishi Mehi he wrote prolifically and profoundly.  He freely cited quotes from a great number of scriptures and sages. His quarters largely lacked books which begged the question: from what source do these quotes come? The quotes are often extremely detailed and extremely varied.  His spoken Hindi was lucid, scholarly yet clear and easily understandable. Santsevi Ji’s greatness was only eclipsed by his humility. He was a living embodiment of what he taught and while traveling extensively on teaching tours he maintained a discipline which included ample time for meditation and other spiritual duties.

Santsevi Ji refused numerous invitations to come and teach in the West. However, he expressed his wish that Santmat be taught by his representatives. Santsevi Ji says:

“By seeking the path within, one will go beyond the sensory realm…and will attain the state of oneness.”

“The past is passed, we have no control over it. Only the present is with us; the future is unknown.

"Take care of the present, the future will automatically will be favorably formed. Today’s seed is tomorrow’s fruit.”

“As a tiger cub does not feel frightened while sitting in her mother’s lap even if she sees the crowd of elephants. In the same manner, if we sit in the lap of all loving God, no fear can touch us.”

“The sun gives brilliance during the day; the moon lights the night. However, a true Teacher illuminates the heart of his pupil day and night.” (2007)

Posted by SantMatRadhasoami at 2:30 AM