Inner Regions/Planes: Seeking, Finding, Being Troubled, Then Astonished, Ruling Over the All (Cosmos), Entering Into Heavenly Rest

Inner Regions/Planes: Seeking, Finding, Being Troubled, Then Astonished, Ruling Over the All (Cosmos), Entering Into Heavenly Rest

Aman Sandhu's Santmat Chart of Inner Regions
http://wayofmystics.webs.com
"God is perceivable only through the soul. But our individual soul has become surrounded or covered by several sheaths or subtle bodies [astral, causal, etc...]. So long as it remains in the captivity of these various subtle bodies and the physical body, it will be under the knowledge of these bodies and organs only, will be under illusory knowledge only, and will not be able to realize God. In order to know Him, the Jivatma or the individual soul shall have to liberate itself from these bondage's. The one who is able to liberate himself from the body and subtle bodies, is able to lift himself beyond the universe, also." (From a Satsang Discourse of Param Poojya Shahi Swami Ji Maharaj)
"God, though present everywhere, is not perceived by our senses. Those initiated by an accomplished Master can see Him within themselves." (Maharshi Mehi)
"The path leading to God is within your heart. Enter into the ajna-chakra and you will find your Beloved. God is found not in a man-made Ka’ba, but in natural Ka’ba (holy place), within your own heart or self. Turn your attention within. You should listen attentively to the reverberating divine Sound. The celestial Sound is coming to take you back to the Source. Remember you cannot hear this with the physical ears. When you focus your gaze within ajna chakra and the consciousness in inverted inward your physical ears automatically will close and the inner ears will open. By that power with inner ears you can hear the celestial Sounds. The original Sound of the creation comes from the Abode of God and it will take you to God." (Swami Sant Sevi Ji Maharaj)
"Begin meditation with internally chanting or repeating the Guru-mantra-incantation (the charged words given by the Guru). And then try to visualize the radiant form or image of the Satguru in the still darkness of the inner sky (with eyes closed). Follow that with focusing your attention at the seat of the soul within, i.e. at the Third Eye or the Inner Eye or the Til Dwaar, by making the two streams of consciousness in your two eyes converge in a Point.
"When the two currents of consciousness meet in a Point, Divine Light appears within. Then, practice Surat Shabd Yoga (Yoga of Divine Sound) i.e., try to shift your attention to listening to the Divine Sounds or myriads of melodies (Anahad Naad) ringing inside. Listening to the Divine Sound destroys all the perversions, agitations and fickleness of
the mind.
"Ascending beyond or transcending myriads of sounds, try to identify and tune in to the Quintessential Unstruck Melody, called "Saar Shabd" or "Anaahat Naad" which alone is capable of taking you and merging you into oneness with the Supreme Lord; this is the ultimate deliverance, emancipation, or liberation." (Verses of Swami Sant Sevi Ji Maharaj) 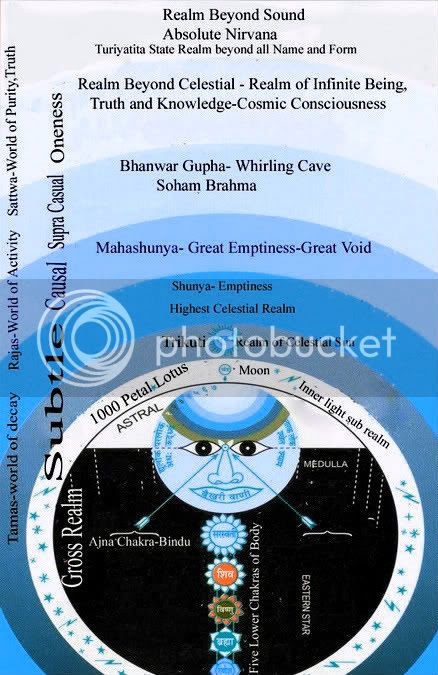