Book Review: The Harmony of All Religions

Book Review: The Harmony of All Religions

The Harmony of All Religions 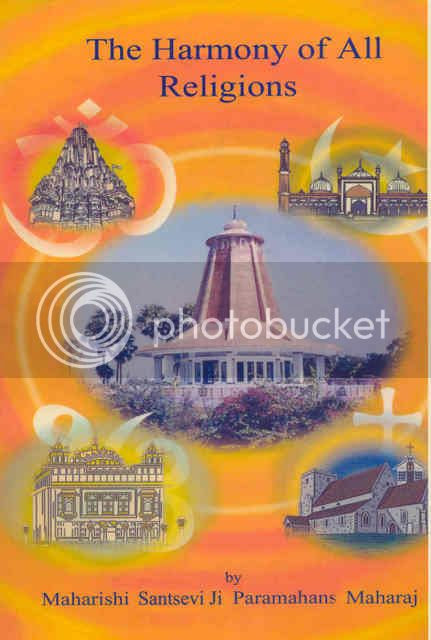 Veena Howard translated the English edition of this book from India. In the Editor's Note at the beginning she writes: "From this day onward our whole world has changed. The "shock and awe" witnessed by the destruction of the towers has sent shock waves through all the established value systems. The feelings of fear and distrust have numbed the hearts of people worldwide and have paralyzed the sense of clear vision. But time of despair must be taken as an opportunity, an opening to search for new horizons, to re-assess our values, and to understand other cultures and religions. This is exactly what the great Sant, Maharishi Shri Santsevi Ji, has sought to accomplish by his book, The Harmony of All Religions. Shri Santsevi Ji Maharaj has been teaching the path of mysticism for many decades and believes in the underlying principles of all prominent world religions."

One of the most impressive books I've ever read on comparative religion and comparative mysticism is, The Harmony of All Religions, taking this study to a whole new level. This newly translated book contains chapters on the Vedic Tradition (Krishna, Gita, Hinduism, bhakti, yoga), Jainism, Buddhism, Judaism, Christianity, Islam-Sufism, Sikhism, and Santmat: the Way of Sages, also known as The Path of the Masters. There is also a biography of the author, as well as an editor's note, which affirms the need for a greater, more in-depth understanding of the great world religions and mysticism in an age of increased global travel and communication.

'Depth' is a word I find myself often using to describe the writings of Swami Sant Sevi Ji Maharaj, who resides at the Maharishi Mehi Ashram in Bhagalpur, Bihar District, India. His spiritual discourses on each of the world religions are very scholarly, accurately and eloquently communicating all these "gospels": beautiful and charming accounts of the childhood of Jesus, the enlightenment of Guru Nanak hearing the voice of the One God (Ek Ong Kaar Saat Naam) as he was bathing in the river Bein, Siddhartha leaving the palace, Muhammad's experiences with Allah in the cave of Ghar-e Hira, etc.... providing an in-depth analysis of the sacred texts of these above-mentioned faith-communities, brimming with quotes and footnotes, from not only the well-known world scriptures but lesser-known sacred texts and spiritual classics of the mystics and saints at the heart of these traditions. The chapter on Lord Mahavira and Jainism for instance breaks new ground in the study of a major world religion that has received very little attention in the West. The same can really be said for each of the chapters of this new book on inter-faith studies. The author displays an intimate knowledge of the history, terminology, esoteric writings, and meditation practices used by the various schools of mystics within each of the world religions, often pointing out the shared vision, the common goals and common threads along the way, such as similar ethical principals of ahimsa or non-violence in thought, word, and deed (like the Golden Rule), Dharma, the Eight Limbs of Yoga, Four Noble Truths and Eightfold Path, chakras, subtle bodies, meditation techniques including the use of mantras, mystical stages of transcendence, Sound-mysticism (Nada Yoga or Yoga of Sound), Light-mysticism (Dristi Yoga or Yoga of Light), the inward journey or ascension to other realms/heavens, jivan mukti or moksha (salvation, liberation of the soul), self (atma) and God (Paramatma) realisation.

The final paragraph of the book summarises the universalist spirit of peace and harmony (as in the harmony of all religions) in the following way: "In different times and different places Saints appear and their followers name their religion according to the Sage or Saint who propounded that tradition. The appearance of differences can be attributed to time, place, and language. This gives rise to various labels for the common views held by all religions. Likewise, due to excessively zealous followers, these seeming differences are often amplified. When all sectarianism and the temporal and linguistic aspects are removed, the basic principles of all the Saints are in accord and the voices of the Saints are in harmony."