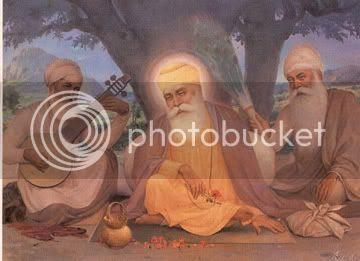 On the 22nd of September in the year 1539 Guru Nanak was sitting under a tree in Kartarpur in his ashram. His face was radiant and peaceful and all his disciples were chanting spiritual hymns in devotion and great ecstasy. The sound of a special Sikh hymn called Japaji infused the whole ashram. At that time Guru Nanak drew a sheet over his body and began chanting. Reciting the glory of Guru he left this body and merged into the Divine forever.After the shock of realizing what had transpired his followers began to consider the funeral arrangements. There was a considerable and heated debate between his disciples as to whether the rites should be Hindu or Muslim because all considered him to be their guru and master. It is said that after some time spent in this heated debate, the sheet covering Guru Nanak's body was lifted. To everyone's amazement Guru Nanak's material body had disappeared. The disciples were humbled, and they divided the sheet, giving one piece to the Muslim followers and one piece to the Hindu followers. The funeral rites were duly performed for the respective traditions using the sheet in place of the missing body of the great sage. According to one legend, flowers were found under the sheet instead of his physical body.-- Sant Sevi Ji Maharaj, from the Sikh chapter of, The Harmony of All ReligionsFrom the Jap Ji, the Morning Prayer of Guru NanakONE UNIVERSAL CREATOR GOD. THE NAME IS TRUTH. CREATIVE BEING PERSONIFIED. NO FEAR. NO HATRED. IMAGE OF THE UNDYING, BEYOND BIRTH, SELF-EXISTENT. BY GURU'S GRACE ~ CHANT AND MEDITATE: TRUE IN THE PRIMAL BEGINNING. TRUE THROUGHOUT THE AGES. TRUE HERE AND NOW. O NANAK, FOREVER AND EVER TRUE.By the Grace of the One Supreme Being,the Eternal, the EnlightenerJap Ji Sahib Ek Ong Kar: The Creator of all is One.Sat Naam: Truth is His Name.Karta Purkh: He is the doer of everything.Nir Bhao, Nir Ver: He is fearless, without anger.Akal Moort, Ajuni Sai Bhang: He is undying, unborn and self-illumined.Gur Prasad: This is revealed through the Satguru's grace.Jap: Meditate.Some verses from the "Peace Lagoon" translation of the Sikh scriptures (Adi Granth, Guru Granth Sahib) adapted for the Mender of Hearts album: "The Crimson Collection, Volume 5," Singh Kaur and Kim Robertson, Invincible Productions: INV 309:Waahay Guroo Waahay GurooWaahay Guroo Waahay JeeoYou are the mender, the mender of of hearts.You are the sustainer of all.You are the mender of the wounds of life.You are the sustainer of all.In your heart You care for everyone.Within all hearts, in everyone.In Your heart You care for everyone.Within all hearts, within all hearts You're there.O my mind, meditate forever on the Holy One.You are the mender of the wounds of life.You are the sustainer of all.So remember Him who alone will carry you,Who alone will carry you to your destination.Meditate forever on the One.O my mind, meditate forever on the One.