A Book of Sant Mat Ethics: “Kabir 1008 Vani” — One of the Most Important Books of Kabir

A Book of Sant Mat Ethics: “Kabir 1008 Vani” — One of the Most Important Books of Kabir 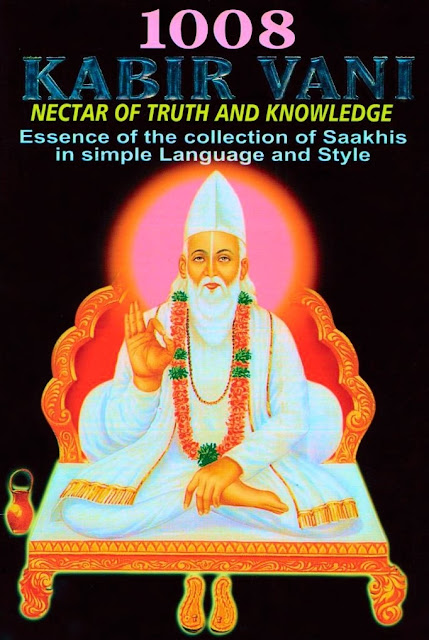 Serving, Helping Others During This Life: "The advantage of being in the human mode of existence lies in giving and serving only, i.e. helping others as much as possible. Because, possibly you will not get this body [human form] again. This time you have been given this body, and so do not hesitate; serve others and that is all." (Guru Kabir, Saakhi Granth of Kabir, 1008 Kabir Vani)

“Love is like a deep sea. Only that lover (of God) who will dive into it fearlessly shall be able to get the pearl of ultimate happiness in it. And one who will not be able to muster up enough courage to dive into it, shall remain sitting at the beach. He will remain without love in this world. How will he get the pearls of ultimate happiness then?” (Kabir 1008 Vani)

"This mind is like an intoxicated elephant. It needs goading with the goad of pure thoughts, so that it gets rid of worldly desires and drinks nectar of spiritual self control... The imaginations of the mind are just as innumerable as the innumerable waves of an ocean. If somehow this mind can become quit by itself, attainment of true knowledge like diamond will become easily accessible (everyman in this world is sad and restless because of lack of knowledge. This true knowledge can be attained only when the mind becomes quit.)" (Kabir 1008 Vani)

A Wonderful Book to Consult: 1008 Kabir Vaani, Selections from the Sakhis, a Book of Ethical Precepts of Kabir: Read Online (scroll down the page to download PDF): https://archive.org/details/1008KabirVaani/page/n5/mode/2up

Book Review: Kabir 1008 Vani
by James Bean
Kabir 1008 Vani — Nectar of Truth and Knowledge
Essence of the Collection of Saakhis (the Saakhi Granth of Guru Kabir) in Simple Language and Style
Compiled by Lalchand Doohan Jigyasu

This is one of the most important books of Kabir to have. Kabir 1008 Vani is a very beautiful and impressive book of ethics and wisdom featuring 1008 sayings of Kabir, one of India’s greatest Masters and poet-mystics, who lived in northern India around six hundred years ago. As with Rumi, the Persian Sufi poet, in recent years Kabir has also become increasingly popular in the West. A few decades ago, the only translations of Kabir were, “Songs of Kabir” by Rabindranath Tagore published in 1915, and Robert Bly’s 1971 paraphrase or “versions” of Kabir, which were also based upon Tagore’s translation. These days however, there are literally hundreds of books available in the English language exploring the poetry and teachings of Sri Guru Kabir Sahib. The Saakhis (a term for a certain kind of poetic composition, a couplet giving testimony of eternal truths) are often used in the satsangs (spiritual gatherings in the name of Eternal Truth) of many spiritual paths based in India. It makes a great deal of sense that spiritual teachers would give satsang talks based upon the Saakhis of Kabir, as they are brimming with wisdom about how to integrate spiritual principles into one’s daily life. Kabir was critical of religious hypocrisy, going through the motions of outward rites and rituals without sincerity of heart. His path was that of Bhakti, meaning, love and devotion for the Beloved Supreme Spirit. For Kabir, the true church, mosque, or temple is within the body, within the human heart. The theme of the Saakhis is bringing all levels of our existence, more and more with each passing day, in body, speech, emotions, and thought, into harmony with the soul or spirit inside.

Posted by SantMatRadhasoami at 12:18 PM