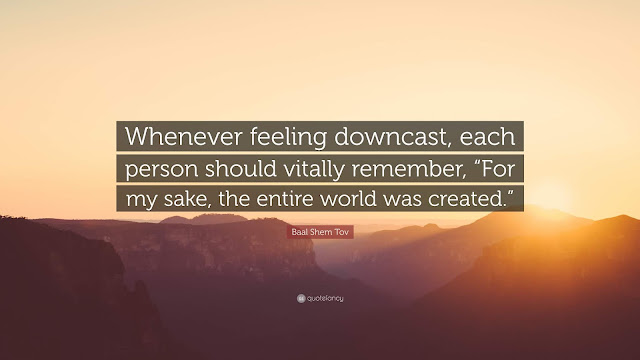 "Whenever feeling downcast, each person should vitally remember, 'For my sake, the entire world was created.'" (Baal Shem Tov)

The Baal Shem Tov is sort of the "Rumi" or "Kabir" of Kabbalah (Jewish mysticism), an example of a towering figure and great mystic of one of the great schools of spirituality. The ending part, "For my sake, the entire world was created", is a variation of an ancient axiom of wisdom. A version of it even turns up in saying twelve of the Gospel of THOMAS:

"The students said to Yeshua, 'We know you will leave us. Who will be our leader?' Yeshua said to them, 'Wherever you are, seek out Yaakov the just [James the Just]. *For his sake heaven and earth came into being*.'"

Martin Buber elaborates and expands on this axiom in a way that includes us all:

“Every person should know and consider the fact that you, in the particular way that you are made, are unique in the world, and no one like you has ever been. For if someone like you had already been, there would be no reason for you to be in this world.” (Ten Rings: Hasidic Sayings, Martin Buber)

"It was for the sake of the God-conscious beings that our True Lord created this earth, and began this play of death and birth".

Since I'm downloading some books on Kabbalah today, I should also take the opportunity to share this passage on the spiritual journey.

"As the eighteenth century Kabbalist Moses Luzzatto taught, the higher soul 'ties man to the highest roots'. Thus, the awakening of each higher soul results in an increase in the amount of nourishment the branches of the upper worlds receive, thereby effecting the outcome of events here on earth in a more positive way. Thus, each one of us can have great influence and none are powerless.

"However, like infants who cannot penetrate the mysteries of the adult world, despite the fact that these mysteries are lived out in front of it, the reality of the upper worlds will remain invisible to us until our spiritual path opens up to the higher reality.

"This higher reality is multidimensional in nature, standing in sharp contrast to the narrowness of everyday life. Once awakened, the human experience becomes vast and boundless, as the awakened individual participates in a universal consciousness as broad, deep, and wide as the universe itself."

--  Shulamit Elson, in, Kabbalah of Prayer -- Sacred Sounds and the Soul's Journey

Posted by SantMatRadhasoami at 5:59 AM