PODCAST: The Case For The Book of ENOCH As Scripture (I, II, & III Enoch), and... The Ascension of the Soul

PODCAST: The Case For The Book of ENOCH As Scripture (I, II, & III Enoch), and... The Ascension of the Soul 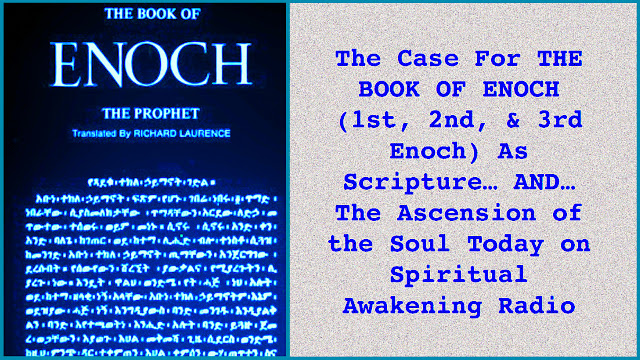 PODCAST: The Case For The Book of ENOCH As Scripture (I, II, & III Enoch), and... The Ascension of the Soul -- Satsang Discourse for the Week of June 2nd, 2019 -- Spiritual Awakening Radio With James Bean @ Youtube: https://youtu.be/RLWNi9l9OFM

OR Listen to, and/or DOWNLOAD, the Podcast MP3 @ The Internet Archive: https://archive.org/details/TheCaseForTheBookOfENOCHAsScripture

* A Secure Yellow Donate Button is Located at the Radio Website:
http://www.SpiritualAwakeningRadio.com/announce.html

Behold, the scripture about Enoch the prophet, who communed with God and, while alive, soul traveled through the heavens, hearing heavenly sounds, seeing heavenly lights, colors, encountering many beings and visions. The Enochian literature represents some of the earliest scriptures of humanity articulating the off-world concept of soul travel, that human beings while alive can explore various heavenly realms, that indeed, it's is part of our spiritual journey that we do experience such visions, that this is intended to be the norm... part of our heritage, a paradise lost that can easily be found again... a mystical journey back to eden we're all invited to take.

As it says of Adam in the Garden of Eden existing, not physically in this realm, but in the Third Plane called Paradise, one of the inner regions of consciousness:

"I made the heavens open to him, that he
should hear the angels singing the song of
victory, and see the bright, radiant Light."

The Case for the Book of Enoch as Scripture

2) Jude Quoted Enoch in the New Testament: The author of the Book of Jude quoted First Enoch in his New Testament epistle (letter), a great canonical endorsement for the Book of Enoch by the Original Jesus Movement. The Bibles that bare the most resemblance to the Scriptures of Jude and the Original Aramaic-speaking Christians is the Ethiopian Bible, as well as the Dead Sea Scrolls-Essene-Qumran Bible. Jude not only quotes from Enoch, but also from the Assumption of Moses. Both Enoch and Assumption of Moses were recognized as Scripture by the Essenes; see more on the Ethiopian Bible below. In addition to Jude, Biblical scholars also have noticed many parallel verses and shared ideas between the New Testament and Book of Enoch, illustrating how influential the Book of Enoch was on Jesus, the authors of the Gospels and other New Testament books. The Book of First Enoch is an important key foundational text of early Christianity.

Tertullian's canon of the Old Testament included the deuterocanonical books, since he quotes most of them. He also cites the Book of Enoch as inspired, and thinks those who wanted to remove it were wrong. (Tertullian.org)

Barnabus, Justin Martyr, Irenaeus, Origin and Clement of Alexandria were also fans of Enoch: The Book of Enoch was extant centuries before the birth of Christ and yet is considered by many to be more Christian in its theology than Jewish. It was considered Scripture by many early Christians. The earliest literature of the "Church fathers" is filled with references to this mysterious book. Second and Third Century "Church fathers" like Justin Martyr, Irenaeus, Origin and Clement of Alexandria all make use of the Book of Enoch. Tertullian (160-230 C.E) even called the Book of Enoch "Holy Scripture". The Ethiopic Church included the Book of Enoch as part of their official canon of the Bible. (Wikipedia Entry About the Books of Enoch)

4) The Epistle or Letter of Barnabas: Like some other major leaders, Barnabas quoted from Enoch, even using the term "Scripture" to describe Enochian passages. See, the Epistle of Barnabas, translated in the book Early Christian Writings -- The Apostolic Fathers, published by Penguin Classics.

5) Enoch is in the Bible: The ETHIOPIAN BIBLE INCLUDES THE BOOKS OF FIRST AND SECOND ENOCH: The Ethiopian Bible contains the books of Enoch (and several other surprising books once banned and thought to be forever lost), thus preserving this earlier understanding dating back to the time of the Dead Sea Scrolls and New Testament that viewed Enoch to be an inspired sacred text.

* Questions? Seeking information on how to be initiated into the meditation practice (the Inner Light and Sound of God), or trying to locate a satsang meetup in your area of the world? Email me here:
James (at) SpiritualAwakeningRadio (dot) com

* An Introduction to Sant Mat Spirituality and Meditation:
https://SantMatRadhasoami.blogspot.com/2019/01/introduction-to-sant-mat-and-radhasoami.html

God is the Ocean of Love, and Souls are Drops from this Ocean.

Posted by SantMatRadhasoami at 2:13 PM