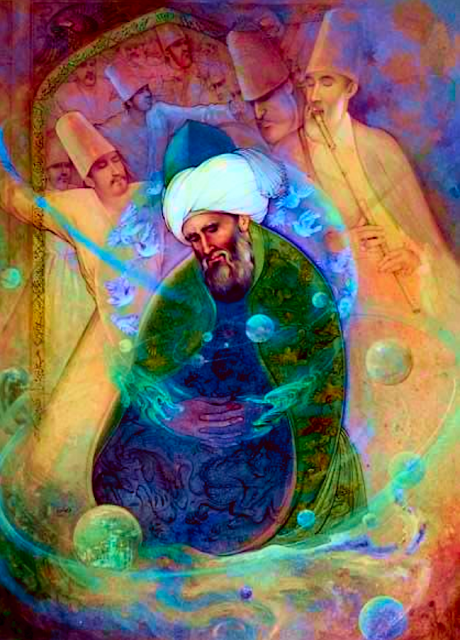 When I saw these veg verses of Rumi I thought, at last! this is going to make for a great new podcast! It's awesome being able to claim Rumi, the King of the Sufi poets, for the #vegan cause! (#Rumi: "To me, even milk is forbidden.") I also reflect a little about the vegetarianism of early Christianity, and about how a religious or spiritual movement like the disciples of Rumi in Sufism, Jesus, Guru Nanak, Buddha, etc... can start out following a vegan or veg diet and yet a few generations later knowledge of that gets lost and the religious sects operating in their names might be adhering to a completely different diet.

"I have existence and I value it so much
So have all the beings on earth and they too, try to preserve it.
Then, how can I kill even the tiniest creature
Just to satiate my palate?"

"Even a seemingly lifeless stone has a degree of consciousness; respect it."

"To me, even milk is forbidden."

"Look at all animals as you look at humans."

"If we consume an animal, its blood and gore will make us act like a slaughterer."

"We began as mineral. We emerged into plant life, and into the animal state, and then into being human, and always we have forgotten our former states, except in early Spring when we slightly recall being green again."

Master Kirpal Singh speaking about Rumi and the other most advanced Murshids (spiritual masters) of Sufi mysticism once said:

“Those who take up the practices concerning the lower centers in the body, do take meat — the Mohammedans and people of other religions also. But those who are anxious to rise above body-consciousness and go into the Beyond have of necessity to eschew all that. This is the Path I have put before you. Liberation or salvation is something which starts only when you rise above body-consciousness. For that reason, vegetarianism is the first essential.” (The Night is a Jungle, published by Ruhani Satsang)

A Vegetarian Jesus and Apostles at the Beginning of Christianity, and, The Gospels of the Ebionites: https://www.youtube.com/watch?v=HF3cOxbRFH8&ab_channel=SantMatRadhasoami

Article: Evidence That Jesus and The Original Aramaic Christians Were Vegetarians, By James Bean: https://medium.com/sant-mat-meditation-and-spirituality/evidence-that-jesus-and-the-original-aramaic-christians-were-vegetarians-b8784ac42506

The Vegetarianism of Guru Nanak and the Sikh Scriptures Today on Spiritual Awakening Radio: https://www.youtube.com/watch?v=wx7oM5j5n-U&ab_channel=SantMatRadhasoami

Various Spiritual Quotes Followed by Two of the World's Oldest Passages Referring to Being VEGAN: https://www.youtube.com/watch?v=UzwluCLITX4&ab_channel=SantMatRadhasoami

Posted by SantMatRadhasoami at 9:44 AM