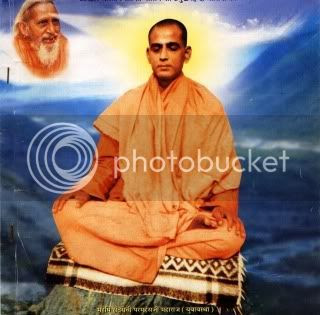 Q. God is Absolute Knowledge, Absolute Light and Infinitely Powerful. Despite being so, how his own part (jivaatmaa) came into bondage? How it fell into the dark abyss of ignorance?

Ans: When the Supreme Sovereign, God, thought in a playful mood: "Ekoham Bahusyaam" (I am one, Let Me be Many!), a sound or vibration was produced. Rishis called this sound by various names such as `Om', `Sfot', `Udgeeth', `Pranav' etc. Creation or Universe(s) was formed by this very sound or vibration. Two large spheres or realms of creation came into being. The first sphere or realm is called `Chetan Prakriti' (Realm of Pure Consciousness), and the second realm is called `jad prakriti' (Realm of Ignorance or Realm lacking in consciousness of its own). `Chetan Prakriti' is one only, while the `jad prakriti' came to be divided into four spheres namely, `Mahakaaran' (supra-causal) `Kaaran' (causal), `sookshma' (astral) and `sthool' (gross). In accordance with the characteristics of these five spheres, five bodies came to be formed namely; `kaivalya' (conscious body), `mahaakaaran' (supra-causal body), `kaaran' (causal body), `sookshma' (astral or subtle body) and `sthool' (gross body).

Currently the realm we are living in is known as `sthool' or gross sphere and accordingly, `jeev' (unliberated individual soul) is living in the gross body. Thus, the `jeev' is bound by five bodies and five spheres. Just as, within one and the same `mahadaakaash' (larger space or sky) its numerous parts such as `ghat' (space or sky within the body), `pat' (space contained between partitions of curtain or cloth) and `math' (space enclosed within the walls of a room or house) come to be separated from it (the parent larger space or sky) due to the covers of body, curtains and walls, the `jeevaatmaa' (unliberated individual soul), because of getting covered by the layers or sheaths of darkness, light and sound has become separated from its original main stream (God), has forgotten its true nature and has come within the influence of `maayaa' (illusion).

Ans: The `aatmaa' (soul) when attached with `antahkaran' (a collective term used to include mind, intellect, ego etc.) is called `jeevaatmaa'. A soul which has got free of `antahkaran' but is attached with `chetan' (consciousness) is called `chetan aatmaa' (conscious soul). There is no difference as such between the `aatmaa' (soul) and `paramaatmaa' (God). The above concepts can also be put like this: the soul attached with or covered by gross layers is known as `jivatma', that with the cover of consciousness only is termed `chetan atma' and the soul which is free of both gross and conscious sheaths is called `atma' (soul) or `paramatma' (God).

[The two natures (gross as well as conscious) are formed and destroyed through `mauj' (playful wish) of God. One must never say or believe these to be unborn, or without a beginning.]

Mahabharat says, "Just as the sea waves (rise on and) merge into the sea itself, similarly the nature or creations, too, are created and destroyed (within God only)." – Mahabharat Shanti Parva.

Nature or creation, too, is said to be without a beginning but not because it is also without an origin like God; it is called so because no time or space can be ascribed to its origin, for these two (space & time) come into reckoning only after the creation or nature is formed. The nature or universe or the creation appeared, with the `mauj' (playful will) of God, within God only; thus its beginning or origin lies in the God who Himself is beyond space & time, without a beginning and an end. God is even said to be the `aadi' (beginning or origin) of `anaadi' (beginning-less or without an origin i.e. nature). Nature or creation is also said to `anaadi saant' (without a beginning – from the point of view of time & space – but with an end).

Q. Lord Mahavir and Lord Buddha have not explicitly made any references to the term `Brahma' or God. Should they be, thus, treated as atheists?

Ans. Though Lord Mahavir and Lord Buddha have not directly used the term `Brahma', they have used words with similar connotations like `attaa', `aatmaa' (Soul), `gahakaarak' (Builder of House) `naath' (Master or Lord) etc. Bhagvan Mahavir has said: "aatmaanam viddhi" (Know your `Self') whereas Lord Buddha has said,

[An individual is his own master; how could any body else be his master? Having restrained or controlled himself very well, he attains to the Lord who is difficult of attainment.]

[O Builder of the House! I saw you; now you won't be able to rebuild the house. All your chains or shackles have been broken; crown of the house has collapsed. Chitta has been rid of all the sanskaaras. `Arhattva' (Destruction of desires or cravings) has been accomplished.]

Thus, it is unfair and improper to call them atheists. In fact, the people of their times were prolifically performing animal sacrifices and violent acts in the name of religion; therefore, they did not use directly words like `Ishwara', `Brahma' or `Bhagawaan' or God. The renowned Buddhist monk Bhikshu Jagadeesh Kaashyap had told me this in reply to an identical curiosity.