Meet a #Vegan #Rumi, the Sufi Poet-Mystic, by James Bean

Meet a #Vegan #Rumi, the Sufi Poet-Mystic, by James Bean 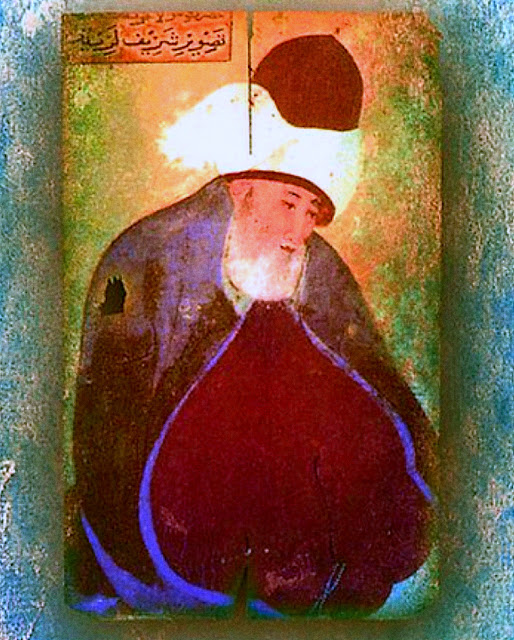 Meat consumption (carnism), being part of an oppressive system of denial and cruelty, in the area of mainstream institutional religions relies heavily on ignorance, outdated Sunday school notions and avoidance of lesser-known sacred texts to maintain the illusion of meat-eating Messiahs, Buddhas and spiritual Masters.

We see this all the time. With Christianity for instance, so many are biblical mythicists and skeptical textual critics of the New Testament cept when it comes to dem loaves with fishes! A couple of references to loaves and fishes with the young disciples of Jesus are elevated into some imagined everlasting Apostolic Fish Company of Galilee whilst ignoring most of the Gospels and literature of the Hebrew Christians (Ebionites) about the various apostles -- who they became -- and the diet they came to follow as part of the ethics of the spiritual path they adopted.

An assumption of Rumi and other major Sufi poets being halal has also been used to provide cover for carnism. The notion put forth goes something like this: "If Rumi was an advanced mystic or Master and he ate meat, then what's the big deal then?" But what if the assumption that Sufi poets like Rumi must have followed a halal diet is another one of those carnistic false assumptions promoted by later pro-halal religious sects in the same way pro-meat Roman Christianity had it's fish symbol, canonized gospels popular with the school of the Apostle Paul while marginalizing the other apostles and banning Ebionite gospels, labeling them as "heretical"? (*1)

See my article: Evidence That Jesus and The Original Aramaic Christians Were Vegetarians: “James was a vegetarian….” (Robert Eisenman, James the Brother of Jesus) “James, the brother of the Lord, lived on seeds and plants and touched neither meat nor wine.” (Epistulae ad Faustum XXII, 3) “John never ate meat.” (Church historian Hegesippus according to Eusebius, History of the Church II 2:3) “The Apostle Matthew partook of seeds, and nuts, hard-shelled fruits, and vegetables, without flesh.” (Clement of Alexandria, The Instructor, Book 2, Chapter 1) Peter said, “I live on olives and bread, to which I rarely only add vegetables.” (Clementine Homilies 12,6; also see, Recognitions 7,6): https://medium.com/sant-mat-meditation-and-spirituality/b8784ac42506

The following is excerpted from a New Delhi Times article on the vegetarianism of Rumi -- actually vegan -- as you'll see from the passages they quote from Rumi ("shunned even milk and milk products").

"At the age of 12, Rumi, born in a Muslim meat-eating world, wrote this quatrain and became a vegetarian till he died.

"Rumi believed that all lives were sacred: 'Taa’shif nifaak b’astz sang (Even a seemingly lifeless stone has a degree of consciousness; respect it).' Rumi was a staunch vegetarian and shunned even milk and milk products ('Sheer mun-haraam nuzt: To me, even milk is forbidden'). He even refrained from sacrificing animals as an Islamic ritual on Eid-Al-Adah (Bakrid).

"Rumi says in Turkish, ‘Ye’k dez charinda-ul-insaan rish’h’aaz (Look at all animals as you look at humans'). This is of paramount importance. This creates sensitivity that further blossoms into universal empathy. The sanctity of every life is to be saved and preserved: ‘Kahin nish shudam el-fazeer-un-nisaar.’

"Rumi  writes that what we eat, directly influences our thinking. If we consume an animal, its blood and gore will make us act like a slaughterer: ‘Un qasaab, gosht-e-zakaaf’. (*2)

“'We began as mineral. We emerged into plant life, and into the animal state, and then into being human, and always we have forgotten our former states, except in early Spring when we slightly recall being green again'” -- Rumi, Selected Poems, Penguin UK

"When Rumi died his body was interred and a shrine, the Yeşil Türbe (Green Tomb), was erected over his place of burial. His epitaph reads:

(*1) The orthodox religions of the world have always had a great way to rig the curriculum and manipulate history (practice revisionist history). They suppress the evidence, ban/burn books and even whole libraries (Ebionite gospels, vegetarian verses, gnostic mystical texts, etc...) and then they shout: "Hey! Where's the evidence?"

(*3) Are there Sufi Orders following the halal diet these days? Yes. Most of them are halal except for the Bawa Muhaiyaddeen group. Bawa Muhaiyaddeen taught vegetarianism. There likely must be a few other veg Sufi Orders too, but probably only a small number of them. Rumi was veg, and the Sufi Order he founded might have began that way, but as we've seen with other religious movements of the past, gradually over time as the masses join a group swelling it's ranks, the dietary customs they bring with them will take over and dominate, in this case the halal diet of the Muslim majority.

Posted by SantMatRadhasoami at 6:52 PM