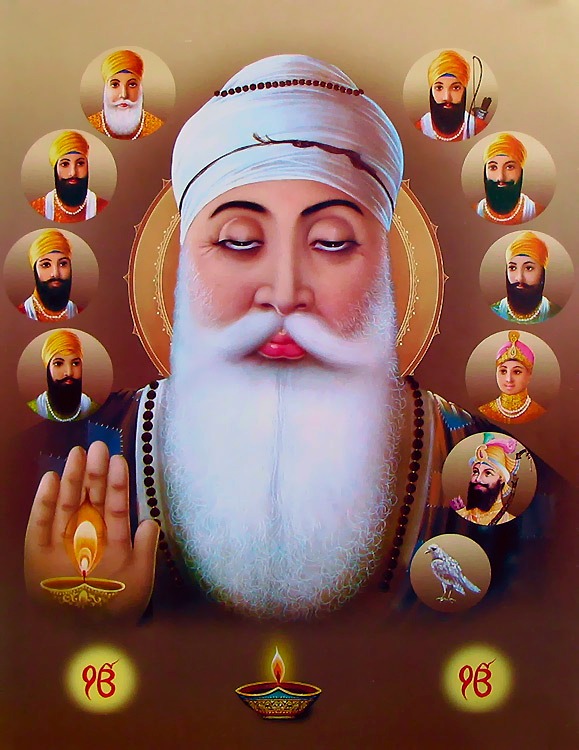 Some have suggested that the Sikh Scriptures are not very clear on vegetarianism, the need to strictly adhere to a vegetarian diet for spiritual and ethical reasons. Not so. Let's have a look! There are numerous vegetarian passages preserved in the Sikh Scriptures (Adi Granth, Shri Guru Granth Sahib) and related Sikh texts  --  quotes from Guru Nanak, Kabir, Guru Arjan Dev, Guru Gobind Singh and others. I've also included quotes from Bhai Gurdaas Ji, also a Persian historian and scholar of comparative religion who wrote about Guru Nanak and the early Sikhs  --  how the original disciples were all vegetarians, and a couple of later Sikh sources documenting vegetarianism in the Sikh world after the time of the tenth sikh guru: Guru Gobind Singh.

Vegetarian Diet and the Sikh Gurus: “The merit of pilgrimages to the sixty-eight holy places, and that of other virtues besides, do not equal having compassion for other living beings.” (Sri Guru Granth Sahib, pg 136) “Do not cause pain to any creature, Go back to your Home with honour.” (Sri Guru Granth Sahib, pg 322) “Keep your heart content and cherish compassion for all beings; this way alone can your holy vow be fulfilled” (Sri Guru Granth Sahib, pg 299) Nanak abstained from animal food and enjoined against cruelty to animals: "Having prohibited his disciples to drink wine and eat pork, he (Nanak) himself abstained from eating flesh and ordered not to hurt any living being." (Mohsin Fani, DABISTAN-E-MAZAHIB) “Countless are the cutthroats who trade in violence. Countless are sinners who keep on sinning. Countless are liars, wandering lost in their lies. Countless are the impious who live on unwholesome food." (Guru Nanak, Jap Ji, Guru Granth Sahib Ji, 4) "You kill living beings, and call it a righteous action. Tell me, brother, what would you call an unrighteous action? You call yourself the excellent sage; then whom would you call a butcher?" (Guru Granth Sahib Ji, 1103). "Kabeer says, the dinner of beans and rice is excellent when flavored with salt. Who would cut throats to have meat with his bread?" (Guru Granth Sahib Ji, 1374) "Kabeer: for those who consume marijuana, fish and wine, no matter what pilgrimages, fasts and rituals they follow, they will all be consigned to hell". (Guru Granth Sahib Ji, 1377). “Do not say that the Vedas, the Bible and the Koran are false. Those who do not contemplate them are false. You say that the One Lord is in all, so why do you kill chickens?” (Kabir, Guru Granth Sahib, 1350) “Telling lies, they eat dead bodies. And yet, they go out to teach others. They are deceived, and they deceive their companions. O Nanak, such are the leaders of men.(Shri Guru Granth, 139)

"One who does not steal, commit adultery, slander anyone, gamble, eat meat or drink wine will be liberated in this very life (i.e. Jeewan Mukt)". (Guru Gobind Singh, 10th Sikh Guru, Sudharam Marag Granth —Shri Guru Gobind Singh Ji’s “Updesh” to Bhai Daya Singh ji which is mentioned in “Sudharam Marag Granth”, and also found written in some old handwritten volumes of Sri Guru Granth Sahib): http://www.info-sikh.com/PageM1.html “His Disciples, Soaked in The Bliss of Nam, gave up opium, hashish, poppy, liquor and various other intoxicants. They would not eat meat. They would not steal. They foreswore adultery and deception. They Practised Saintliness.” (Sri Guru Panth Parkash): http://namdhari.faithweb.com/panthparkash.htm

Vegetarian Diet and the Sikh Gurus: "Living by neglect and greed, the world eats dead carcasses. Like a goblin or a beast, they kill and eat the forbidden carcasses of meat. Control your urges, or else you will be thrown into the tortures of hell." (Guru Arjan Dev, Guru Granth Sahib Ji, 723). Bhai Gurdaas Ji said: "They eat meat by cutting throats, what will their own condition be?" (Vaar 24, Pauree 17) "To take what rightfully belongs to another, is like a Muslim eating pork, or a Hindu eating beef. Our Guru, our Spiritual Guide, stands by us if we do not eat those carcasses. By mere talk, people do not earn Liberation. Salvation only comes from the practice of truth. By adding spices to forbidden foods, they are not made acceptable. O Nanak, from false talk, only falsehood is obtained.” (Guru Nanak Dev Ji, Guru Granth Sahib Ji, 141) "You kill living beings, and call it a righteous action. Tell me, brother, what would you call an unrighteous action? You call yourself the excellent sage; then whom would you call a butcher?" (Guru Granth Sahib Ji, 1103). “You keep your fasts to please Allah, while you murder other beings for pleasure. You look after your own interests, and so not see the interests of others. What good is your word? O Qazi, the One Lord is within you, but you do not think or contemplation on Him. You do not care for others, you are mad about religion, this is why your life is wasting away." (Kabir, Guru Granth Sahib Ji, 483): http://www.realsikhism.com/index.php?subaction=showfull&id=1248309400&ucat=7

“On 3rd September 1708, Guru Gobind Singh Ji administered the vows and Amrit (blessed necter) to Madho Das, a Hindu Sadhu or ascetic, and gave him a new name, Banda Singh. At the same time, he gave Banda Singh a Nagara (war drum), Nishan Sahib (banner) and five arrows from his own quiver as symbols of Authority. Banda Singh was also accompanied by five Sikhs to assist him to build up his forces so as to repel the tyranny of the Mughal Empire.” — http://sikhcoin.blogspot.com/2013/05/baba-banda-singh-bahadur-1670-1716-and.html 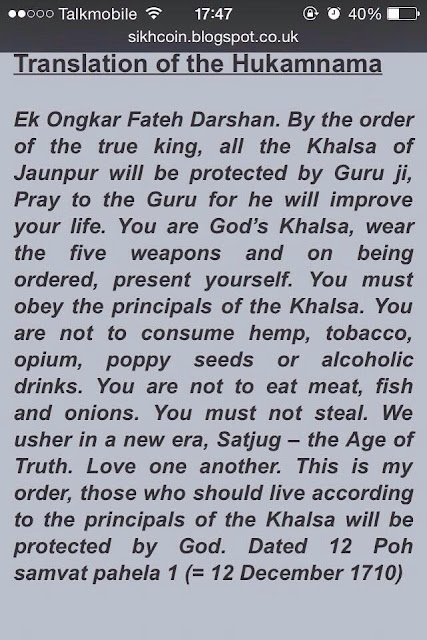 English Translation of the Hukamnama Shown Above

“Ek Ongkar Fateh Darshan. By the order of the true king, all the Khalsa of Jaunpur will be protected by Guru ji, Pray to the Guru for he will improve your life. You are God’s Khalsa, wear the five weapons and on being ordered, present yourself. You must obey the principals of the Khalsa. You are not to consume hemp, tobacco, opium, poppy seeds or alcoholic drinks. You are not to eat meat, fish and onions. You must not steal. We usher in a new era, Satjug — the Age of Truth. Love one another. This is my order, those who should live according to the principals of the Khalsa will be protected by God. Dated 12 Poh samvat pahela 1 (= 12 December 1710)” — http://sikhcoin.blogspot.com/2013/05/baba-banda-singh-bahadur-1670-1716-and.html


Link BACK to the MAIN PAGE of the E-Library: https://SantMatRadhasoami.Blogspot.com/2019/01/sant-mat-radhasoami-books-main-page-e.html

Posted by SantMatRadhasoami at 11:37 PM