Guru Nanak Chart of the Heavens -- The Five Khands

Guru Nanak Chart of the Heavens -- The Five Khands

Chart of the Heavens Based on Guru Nanak's Morning Prayer (Jap Ji) -- THE FIVE KHANDS (REALMS) -- The Spiritual Journey, Ascension of the Soul Back to God 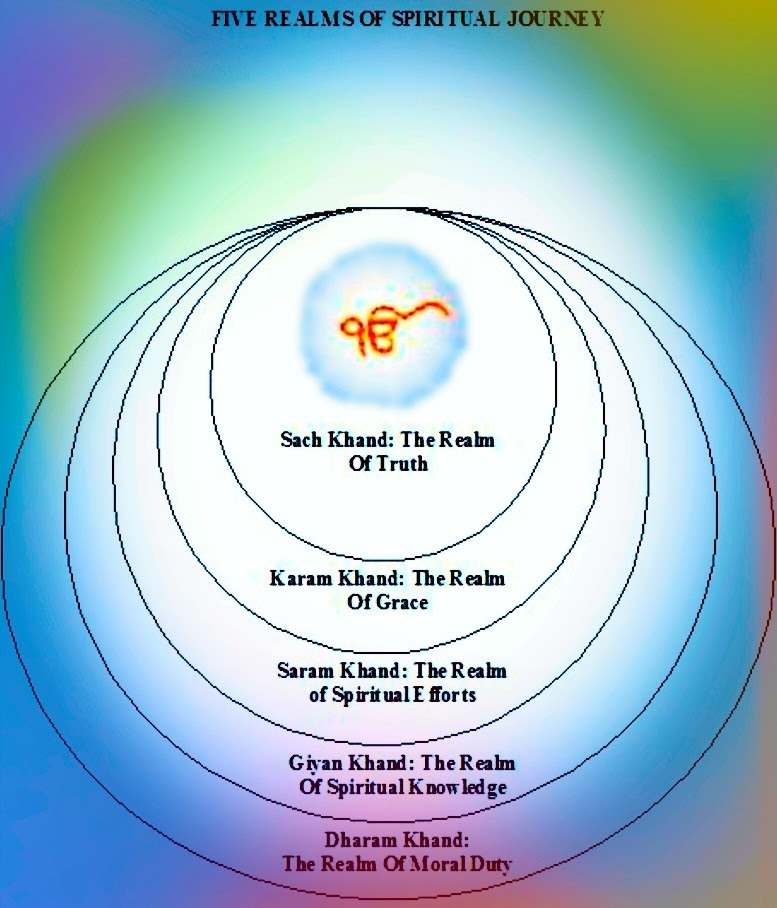 (4) Karam Khand or the Realm of Grace.

(3) Saram Khand or the Realm of Spiritual Efforts: Humility and Ecstasy.

(2) Gian Khand or the Realm of Knowledge (Gnosis).

(1) Dharm Khand or the Realm of Action [Physical Plane].

1. Dharam Khand: The Realm of Action -- This Khand refers to the karmic life of beings on earth and their daily tryst with Karma. Guru ji [Guru Nanak] has called earth a Dharamshal (a home of Dharma).

Guru Nanak: "The earth is a place where day, night, and date have been created along with air, water, fire and the sky. There is so much variety of living beings on earth. As are their deeds and actions, so is their result. The law of karma thus is behind their life circumstances. The result of karma may look unjustified outwardly but is a corrective justice of the law, as in HIS true court only truth prevails. It is also the karma done while living on earth that attracts the Nadar (Grace), which is the sign that the person is now open to dwell in next Khand. The Sikh [disciple] receives the fruit of his thought and action and goes ahead through Jap (meditation) and Simran. Such is the Dharma in the Dharam Khand." (Naamaukhad's Sikh Translation)

"Creating the day and the night, the months and the seasons,
The fire, the wind, the water and the nether regions,
Amidst all these, He set up the earth as Dharm Khand
or the arena of action.
And He peopled it with creatures of many colours and many forms,
Creatures of whom there is no count.
All are judged according to their deeds,
For true is the Lord and immaculate His Law.
Those acceptable to Him are honoured in His Court,
And it is only through His Grace that one may gain that distinction.
The imperfect are perfected there,(1)
O Nanak! It is there that this mystery is revealed." (Kirpal Singh's Translation)

(1) The last two lines -- "Kach pakai uthe pa-aye, Nanak gia japey ja-aye" have been invariably interpreted by various translators, as stating that the true and the false are known there and can no longer deceive. But this does not appear to stand as it apparently ignores the fact that the lines follow on the reference to those honoured by God and the metaphor of "raw and ripe" suggests immaturity and maturity, rather than falsehood and truth.

"The first is the Realm of Dharm, which the soul must fully realise before it can rise to the next higher spiritual plane above it. This is the stage where the embodied souls must work fully cognisant that it is He who made the world phenomena with all the immutable laws which bind one and all. The law of cause and effect nobody can escape. What a man sows, he must reap. There is none outside His domain. Men's actions go with them after their death and are weighed in the scales of God's Justice. Those found wanting are sent for judgment according to their actions. The only thing acceptable at his Court is 'communion with and practice of the Divine Word.' Those who adhere to it, are honoured." (Kirpal Singh's Commentary)

2. Gyan Khand: The Realm of Knowledge (Spiritual Knowledge/Gnosis) -- The Gurbani, although simple, has subtle meanings behind each and every word. As Vichar is done the Gurbani opens up doors and more doors of knowledge and wisdom. First, let us see how Guruji [Guru Nanak] has described the Gyan Khand:

Guru Nanak: "So many winds, waters and fires; so many Krishnas and Shivas. So many Brahmas, fashioning forms of great beauty, adorned and dressed in many colors. So many worlds and lands for working out karma. So very many lessons to be learned! So many Indras, so many moons and suns, so many worlds and lands. So many Siddhas and Buddhas, so many Yogic masters. So many goddesses of various kinds. So many demi-gods and demons, so many silent sages. So many oceans of jewels. So many ways of life, so many languages. So many dynasties of rulers. So many aware people, so many devotees, says O Nanak, His limit has no limit! In the realm of wisdom, spiritual wisdom reigns supreme. The Sound-current of the Naad vibrates, amidst the sounds and the sights of bliss." (Naamaukhad's Sikh Translation)

[(1) Karam Bhumi: A place where one is endowed with a free will, and reaps the fruits of his own actions. This world is termed as Karm Bhumi for here reigns the principle of action and reaction or cause and effect. (2) Sumer: The golden mountain seen in this spiritual plane by the devotees. (3) Dhru: A saint proverbial for his steadfast meditation. (4) Danu: Demigods.]

"Nanak, in this stanza describes the immense expansion of the soul's horizon when it enters "Gian Khand" or the Realm of Knowledge. Here the devotee sees the manifold nature with all created things. Here he begins to hear the rapturous strains of Melodious Song resounding through the whole creation. Here he feels excessive joy at the conception of Nature with her immutable laws, her infinity of forms and phenomena, multifarious creations and manifold blessings that he finds." (Kirpal Singh's Commentary)

3. Saram Khand or the Realm of Spiritual Efforts: Humility and Ecstasy

Guru Nanak: "In the realm of humility, the Word becomes forms. These are fashioned with incomparable distinctness here. These things cannot be described. One who tries to speak of these regrets the past. The surat (awareness), intellect and understanding of the mind are shaped here. The consciousness of the spiritual warriors of spiritual perfection, are shaped here." (Naamaukhad's Sikh Translation)

"Divine Knowledge illumines all in the Realm of Knowledge,
While Divine symphonies play unending music,
and Joy and Bliss reign supreme,
Next, the Realm of Ecstasy, where the Word is enrapturing.
Everything created here is marvelously strange,
and beyond description,
Whoever tries to describe the same, must repent his folly.
Herein the mind, reason and understanding are etherealised,
the self comes to its own, and develops the penetration of the
gods and the sages." (Kirpal Singh's Translation)

"From the description of Gian Khand or the Realm of Knowledge, Nanak proceeds to describe, "Sarm Khand," or the Seal of ecstasy. Here everything is enchantingly beautiful and marvelously strange, and words are of no consequence. It is here that the soul becomes etherealised by the power of the Word and one gets an insight into the real nature of things." (Kirpal Singh's Commentary)

4. Karam Khand: The Realm of Grace

Guru Nanak: "In the Realm of Karam, the Word is the Effort. No one else dwells here, except the great spiritual heroes. They are totally imbued with the oneness consciousness. They are sewn together with the creator filled with awe of HIS glory. Their form (mind) cannot be described. They do not die (do not reincarnate) and so neither are deceived (by maya) when within whose minds the Lord abides. Here (in Karam Khand) devotees of many worlds dwell. They are in anand (spiritual joy) as the True Lord abides in their mind." (Naamaukhad's Sikh Translation)

"Higher still stands Karm Khand, the Realm of Grace,
Here the Word is all in all, and nothing else prevails.
Here dwell the bravest of the brave, the conquerors of the mind,
filled with the love Divine,
Here dwell devotees with devotion, incomparable as Sita's.(1)
Illumined with beauty ineffable,
All hearts filled with God, they live beyond the reach of death
and of delusion.(2)
Here dwell the Bhagats or Sages drawn from all regions,
Who rejoice in the True One and live in perpetual bliss." (Kirpal Singh's Translation)

[(1) Sita: The wife of Rama known for her great devotion. (2) The word delusion here refers to the delusion of maya or matter.]

"In the Realm of Grace, man rises above the evanescent charms of the phenomenal world. He sees all nature standing submissively to serve at God's Feet. His Word purifies the soul of its sins and awakens the latent energies in it. Matter no longer blinds the inner vision. For him, the Lord pervades everywhere and he is now fully conscious of Him. Here one comes face to face with the Word in Its pure substance. And he now knows himself and his true origin, for he sees himself as of the same substance as God." (Kirpal Singh's Commentary)

Guru Nanak: "In the Realm of Truth, the Formless Lord abides. Having created the creation, HE watches over it and HIS Nadar (Glance of Grace) bestows happiness (to the devotee). There are planets, solar systems and galaxies. If one speaks of them, there is no limit, no end. There are worlds upon worlds of His Creation. As is HIS commands, so they operate." (Naamaukhad's Sikh Translation)

"Sach Khand or the Realm of Truth is the seat of the Formless One.
Here He creates all creations, rejoicing in creating.
Here are many regions, heavenly systems and universes,
To count which were to count the countless,
Here, out of the Formless,
The heavenly plateaux and all else come into form,
All destined to move according to His Will.
He who is blessed with this vision, rejoices in its contemplation.
But, O Nanak, such is its beauty that to try to describe it
is to attempt the impossible."(3) (Kirpal Singh's Translation)

"Finally, the pilgrim soul reaches Sach Khand or the Abode of Truth. Here complete Oneness is realized and it sees all universes functioning according to His Will in devout awe and adoration. Even remembrance of such a vision is blissful, but the vision itself is such that no eye has ever seen, the heart cannot conceive and the tongue cannot describe." (Kirpal Singh's Commentary)

For online translations of other books of Guru Nanak and the Adi Granth (Sikh Scriptures, Shri Guru Granth Sahib), Dasam Granth and many others, see the Sant Mat Library: http://www.spiritualawakeningradio.com/library.html

Sant Mat Satsang Podcasts: Dadu the Compassionate Mystic, Parts 1 and 2, "Changing Your Destiny By Contemplating the Divine Light Within", and links to more collections of Sant Mat Podcasts you can listen to anytime 24/7-- GO TO:
https://medium.com/sant-mat-satsang-podcasts